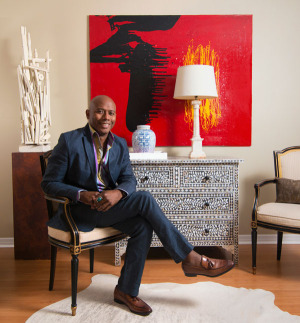 Oskar Torres creations exude an overall feeling of style and sophistication without pretension, best described as “Renaissance Modernism” by Dana F. Tucker the Publisher & Editor-in-Chief of “How We Live Magazine.”

He has also styled room settings for IKEA, the Bloomingdale’s and Domestications catalogs and windows for Liberty of London in New York, the D&D Building, Plaza Flowers and the St. Regis Hotel in the Upper East Side of Manhattan.

In 2019 the Black Artists and Designers’ Guild welcomed him as a member and featured his work as an interior designer. Oskar’s contributions to philanthropy include designs for fundraising events in the Tri-state area such as: The NJ Junior League Designers’ Showhouse in Upper Montclair NJ, the Hamptons Cottages & Garden Idea House in Bridgehampton, Design on a Dime Miami (2016 & 2017) and Design on a Dime NY, as well as the Holiday Show House in New York City. Memorial Sloan-Kettering Cancer Center, the Metropolitan Opera, the Lighthouse for the Blind and the Ronald McDonald House in Long Island, have also received in kind donations from Mr. Torres.

The interior design magazine, New York Spaces, granted Oskar Torres the award of “A new face of Design” in the “10 under 40” issue.